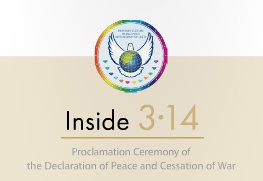 Proclamation Ceremony of the Declaration of Peace and Cessation of War

Over 1,000 renowned figures both from Korea and all over world including heads of state, legal representatives, media, youth and women’s organizations have gathered to support the Declaration of Peace and Cessation of War at the COEX Auditorium in Seoul, Republic of Korea on March 14, 2016. The proclamation ceremony served not only as a platform to proclaim such a Declaration to the public but also to initiate its development process into an enforceable International Law, bring forth a world without wars.

As current international law is based upon a premise that armed force can be used in certain circumstances, without change, it would be impossible to completely stamp out the embers of conflict.
Everyone who truly wants a world of…

How can we abolish war? I want to come true the World of Love, Peace and Freedom. We are living in a global village and everyone in the world is our friend.